Ten wise quotes about work 500 years in the making 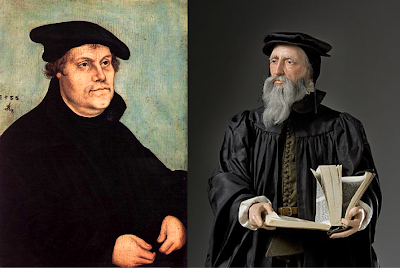 This year marks the 500th anniversary of the Protestant Reformation, one of the most significant events in church history. In 1517 German Martin Luther posted his 95 Theses on the door of the Castle Church in Wittenberg, sparking a movement that reverberated across Europe. The reformers “protest” against the Church was around the area of how people are made right with God, and has been summarised in five solas (sola meaning “alone”):

As part of the reformation, the reformers, Luther and John Calvin in particular, helped Christians discover afresh what the Bible taught regarding work. It formed part of their challenge against the church hierarchy that considered their “sacred” work as being of higher value to God than the work of “ordinary” labourers. Not so, Luther and Calvin argued.

So as a small contribution to all that is being said, and done, and written this year to mark the 500th anniversary of the Protestant Reformation, here are 10 of our favourite quotes about work attributed to Luther and Calvin, wisdom that still bears much truth we need to hear 500 years on.

The value of all work

“There is no work, however vile or sordid, that does not glisten before God” (Calvin)

“No task will be [seen as] so sordid and base, provided you obey your calling in it” (Calvin)

“It is pure invention that pope, bishop, priests, and monks are called the spiritual estate while princes, lords, artisans and farmers are called the temporal estate. This is indeed a piece of deceit and hypocrisy”’ (Luther)

Housework “has no appearance of sanctity; and yet these very works in connection with the household are more desirable than all the works of all the monks and nuns” (Luther)

“Even if I knew that tomorrow the world would go to pieces, I would still plant my apple tree” (Luther)

The purpose of work

“The Christian shoemaker does his duty not by putting little crosses on the shoes, but by making good shoes because God is interested in good craftmenship” (Luther)

“For God will be working all things through you, He will be milking the cows through you and will be performing the most menial duties through you, all duties, from the greatest to the least, will be pleasing to Him” (Luther)

The place of working with non-Christians

“If the Lord has willed that we be helped in physics, dialectic, mathematics, and other disciplines by the work and ministry of the ungodly, let us use this assistance” (Calvin)

How to be a public Christian in an Israel Folau world